The Abode of Dasamahavidya - Different manifestations of Shakti 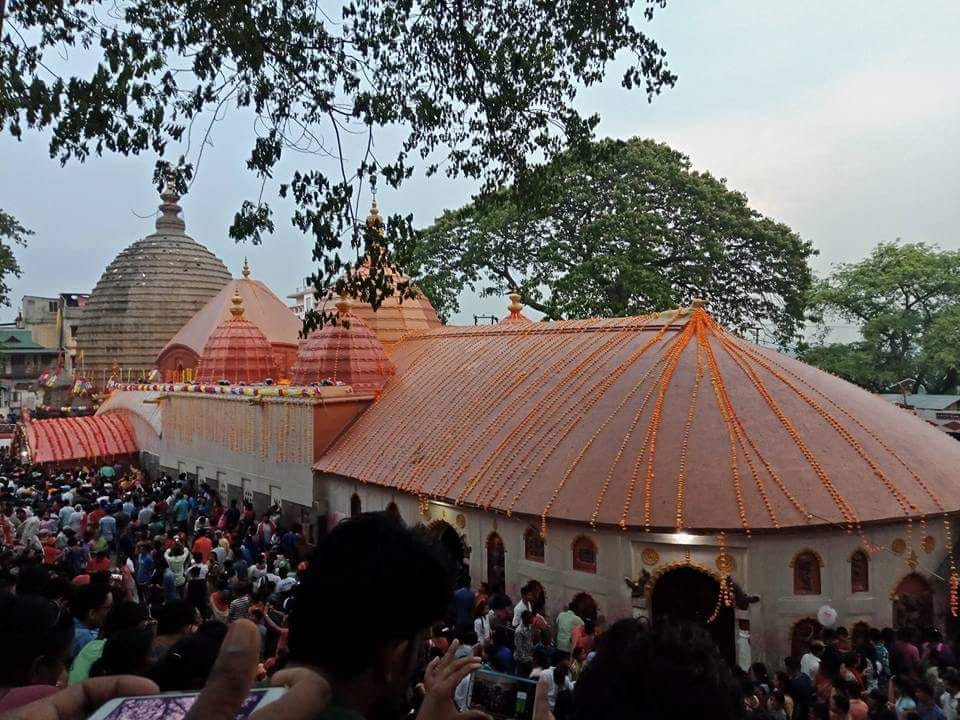 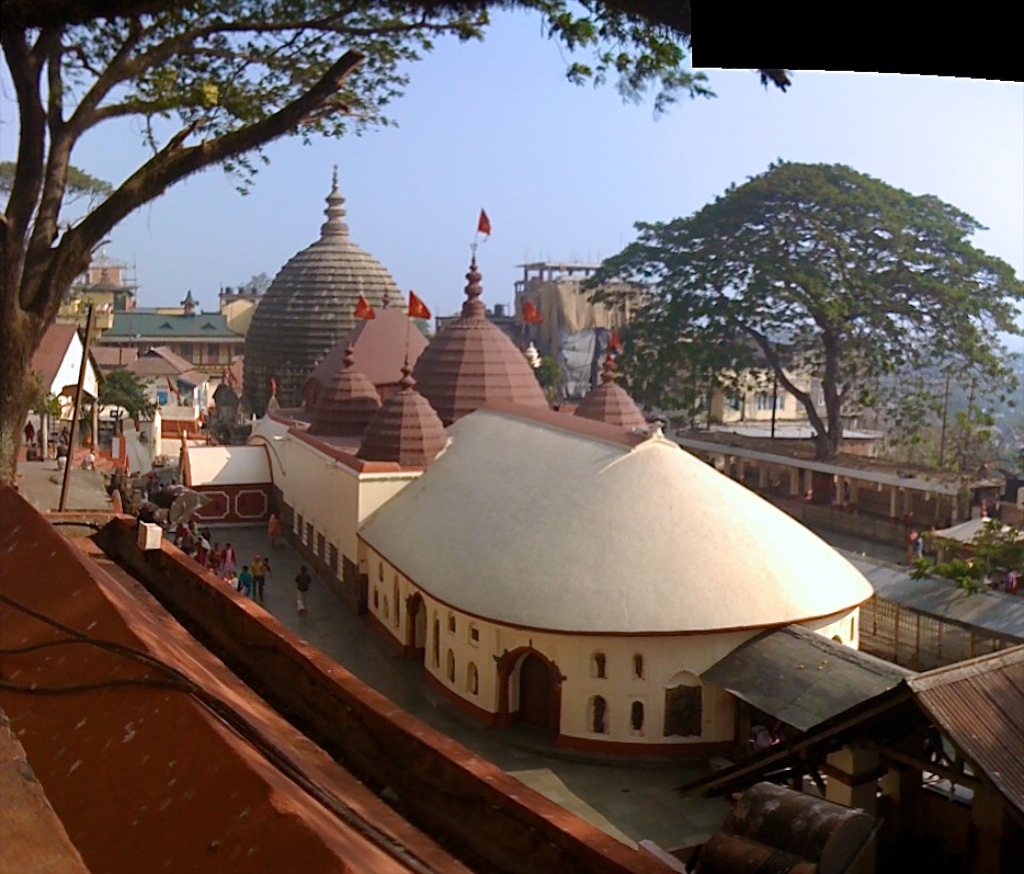 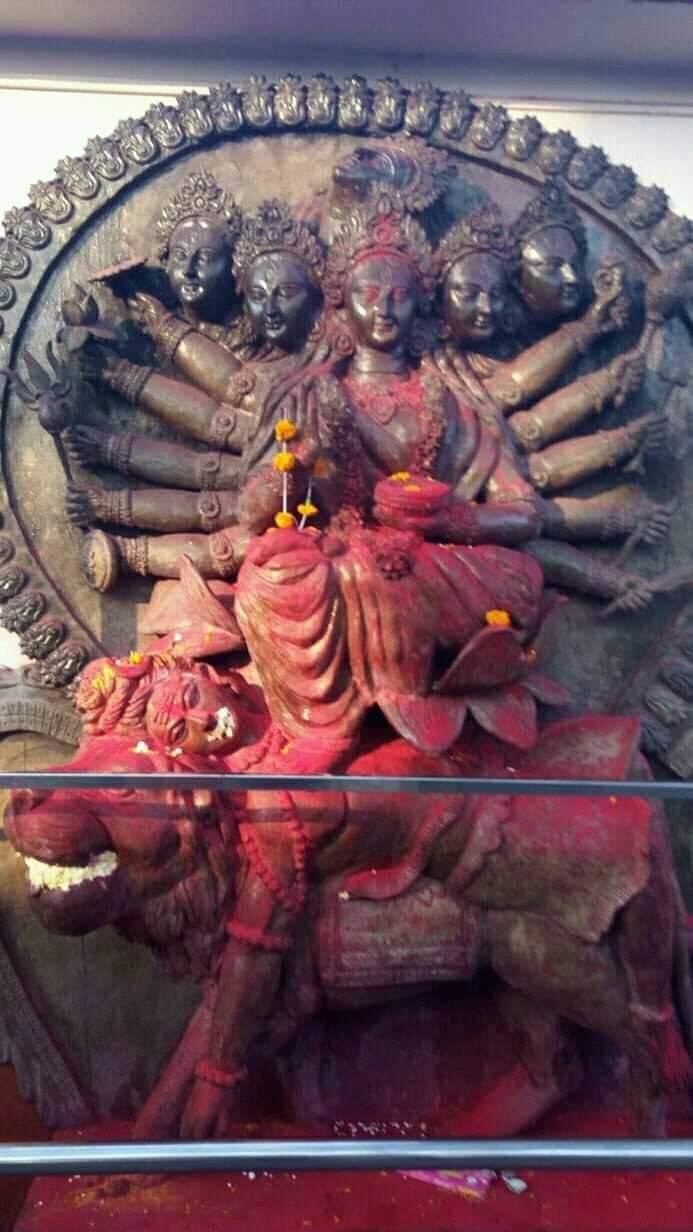 Kamakhya Shaktipeeth is one of the 4 sacred Adi Shakti Peethas devoted to Shakti. This temple is dedicated to Mata Sati’s Yoni Khanda (vagina), and the principal deity is worshiped as Devi Kamakhya. It is located at the hilltop of Nilachal Hill in Guwahati. Kamakhya Devi is also known as the Bleeding Goddess.

Kamakhya Shaktipeeth is considered one of the holy abodes of Parashakti Devi Sati and also one of the 4 important Adi Shakti Peethas. It is also revered as a tantra peetha. Apart from Kamakhya Temple, the other 3 significant Adi Shakti Peethas are named as follows, Tara Tarini (Sthana Khanda) close to Brahmapur, Bimala (Pada Khanda) inside the Jagannath Temple in Puri and Dakshina Kalika (Mukha Khanda) in Kolkata. There are 51 Shaktipeethas in total, out of which, 4 are revered as Adi Shaktipeethas and 18 as Maha Shaktipeethas. The 51 Shaktipeethas are a representation of 51 parts of Mata Sati’s body which fell down on earth, after she self-immolated herself in the fire of yagna conducted by her father, Daksha. 51 Shakti Peethas are believed to be the representation of 51 Sanskrit alphabets. The Garbha Griha of the temple is in an underground cave and is devoid of light, but, even in the darkness, one can feel a unique and strange power. It houses Devi Sati’s womb and vagina. The steps leading to Garbhahriha have water flowing through them which keeps the yoni (vagina) moist all round the year. Kamakhya Devi is depicted as a young female with multi-coloured heads and twelve arms, wearing a red sari. The Shakti Peetha is surrounded by 10 small temples devoted to Mata Kali, in her different avatars namely, Dhumavati, Bagola, Tara, Matangi, Bharavi, Kamala, Chinnamasta, Bhuvaneshwari and Tripura Sundari. The temple stands as a magnificent monument amidst picturesque beauty and is a popular tourist attraction.

Kamakhya Shaktipeeth is a hilltop temple located on the Nilachal Hill in the western part of Guwahati in the North Eastern state of Assam in India. It is close to the Brahmaputra River.

The Abode of the Tantric Goddess of Desire

Book a Pujan at Kamakhya Shaktipeeth

Kamakhya Devi is the representation of the creative strength of Mahakali or Shakti. She is not just wise, courageous and creative, but also in touch with her sexuality and fertility. The Kamakhya Devi at the temple, is also called the Bleeding Goddess. The womb and the private parts of Shakti are in the Garbhagriha of the temple. Kamakhya devi is represented by a young female clad in a red sari, and having multi-colored heads with 12 arms. She is referred to as, ‘the yielder of desires’ and ‘giver of salvation’, in the Kalika Purana. It is said that Kamakhya Devi bleeds during the month of June and the Brahmaputra River which is close to the temple, turns red. There is no explanation or any scientific reason with regards to why the water of the river becomes red. Menstruation cycle is the representation of a woman’s inventive and creative capacity. The Kamakhya temple acknowledges this capacity present in each lady. The temple is closed for three days when Kamakhya Devi menstruates. This rule is followed strictly and even the farmers stop all farming related activities, during these 3 days. On the 4th day, the temple re-opens and a fertility festival named Ambubachi, is celebrated at the Temple. Devotees dip their handkerchiefs in the red water of Brahmaputra River and believe that by doing this, Devi Kamakhya blesses them with good luck. The temple also holds great significance for followers of Tantric Vidya and is revered as Tantric Peetha. Tantric worship gives more importance to female Shakti, than the male Gods, and a special importance is given to the worship of yoni, in tantric worship. Another significance of the temple is that the Kamakhya sindoor, which is available in a crystalized form and is believed to ward off evil eye and black magic effects. It also helps in dealing with problems related to relationships, career and infertility. Thus, the temple is considered to be a center of solutions for all kinds of problems, and is worshiped by people with great devotion and belief.

Some special Pujas performed at the temple are:

The Kamakhya Temple is probably the most ancient temple and consequently has a long and distinguished history related to itself. It is accepted that this temple was built during the Mleccha tradition, in the 8th – 9th century. The Kamarupa Kings, from Indra Pala to Dharma Pala, were devoted followers of the Tantric cult and during that time, this temple destination became important for Tantric practices. The Kalika Purana was written in the 10th century, and it upgraded the significance of the temple as a seat for Tantric penances and magic. Spiritualist Buddhism or Vajrayana arose here around that time, and various Buddhist teachers in Tibet, were known to have a connection with Kamakhya. The Kamakhya temple was destroyed during Hussein Sha’s attack on the Kamata realm. The remnants stayed unseen until the 1500s, when the originator of the Koch Dynasty, Vishwasingha, restored the temple as a site of love. The Kamakhya temple was remade in 1565 AD, during the rule of his son and since then the place of worship has been a significant temple for Hindus across the world. Later, an earthquake in 1897 AD, caused some damages to the main temple and domes of the other temples in Kamakhya. A helping hand by the Royal Court of Kochbihar, made the repairing work successful.

The Kamakhya Temple followed the Nilachala Style of Architecture. It is believed that the masons sent by Koch King, Naranarayan, during 1540 – 1585 AD, from Kochbihar, failed several times to rebuild the Shikhara using the original stone blocks. Finally, they opted for bricks to form a round dome from the Saracenic style of architecture. They created a dome with 16 sided polygons, decorated with horizontal bands. The main temple contains a dome named Antarala, two-roofed design, similar to traditional cottages in Assam. The renovation of the temple in 1565 AD relates to the late medieval Assam. The Kamakhya temple is the only temple in Assam that has a ground plan for the temple. It has some unique architectural features. The temple consists of five chambers and each chamber has its own architectural design.

The outer walls of the temple have many images showing different aspects of Shiva. There are many sculptures depicting various religious beliefs on the walls of the main temple.

The path to Garbhgriha is narrow and is not well lit, making it a dark cave with high energy. There are specific areas in the temple that are created to perform specific rituals such as a place to offer coconut, a place to light a diya, a place to tie the sacred thread and a specific place for sacrificial rituals.

By Air: Guwahati Airport is the nearest to the Kamakhya Temple with 20 km of distance.

By Road: Assam Tourism Development has many buses connecting Guwahati to major highways and cities.

There are many accommodation options that devotees can choose from. Some of them are:

Four main festivals celebrated in the temple are:

Devotees believe that the Kamakhya Temple is the spot where love blossomed between Bhagwan Shiva and Sati Mata. By visiting this temple, one’s relations get strong and Kamakhya Devi blesses her devotees with good luck. It is also a solution to many problems such as evil eye effects, ghost or negative influences, infertility and career related problems, making it an important place to visit, to bring stability in life. Seeing the red water of Brahmaputra River is an experience in itself and one should not miss this mystical sight.