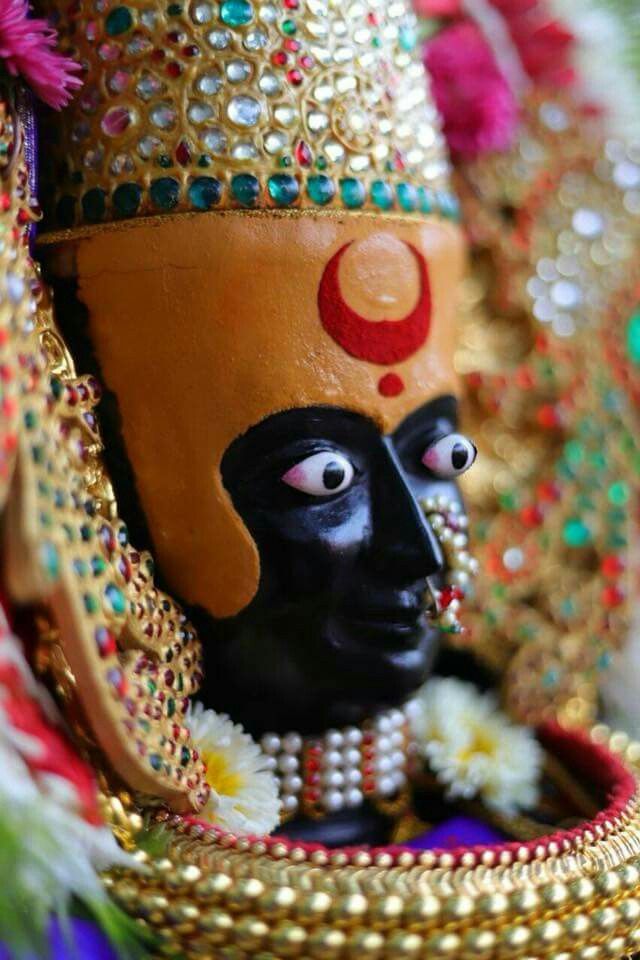 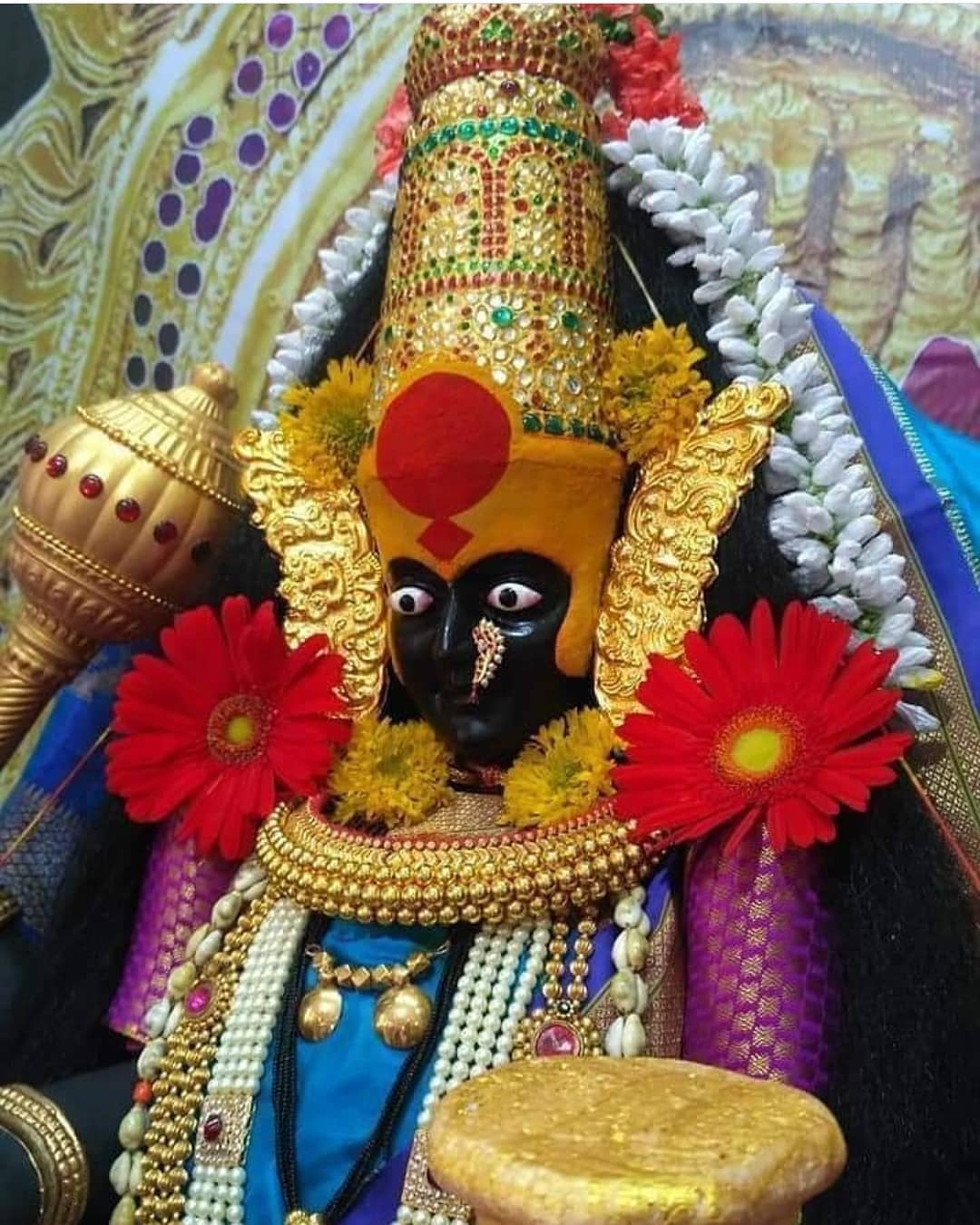 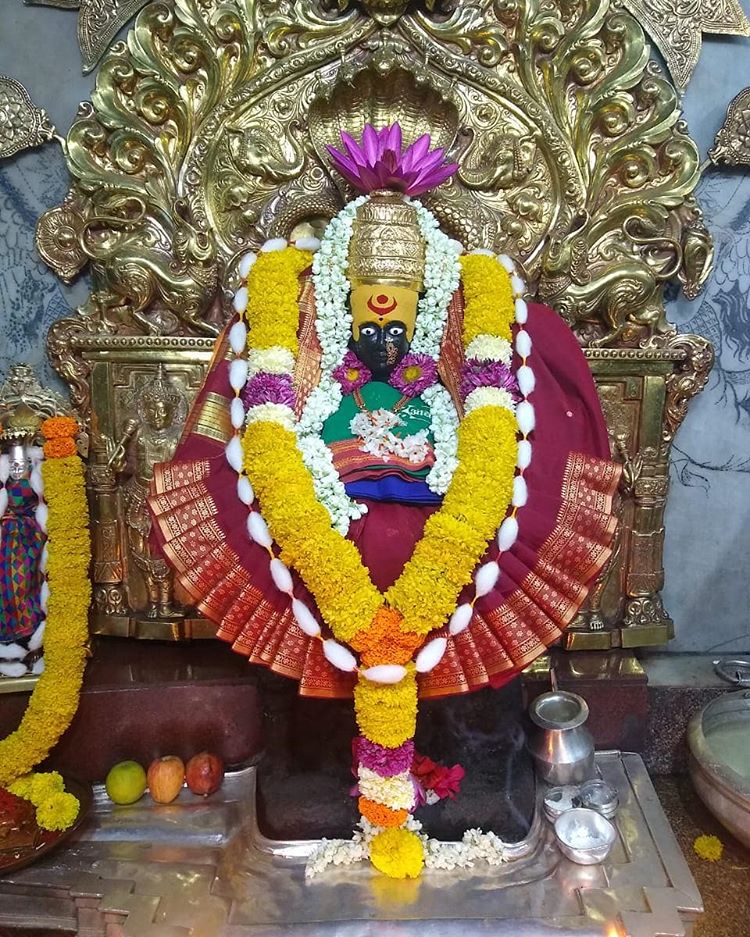 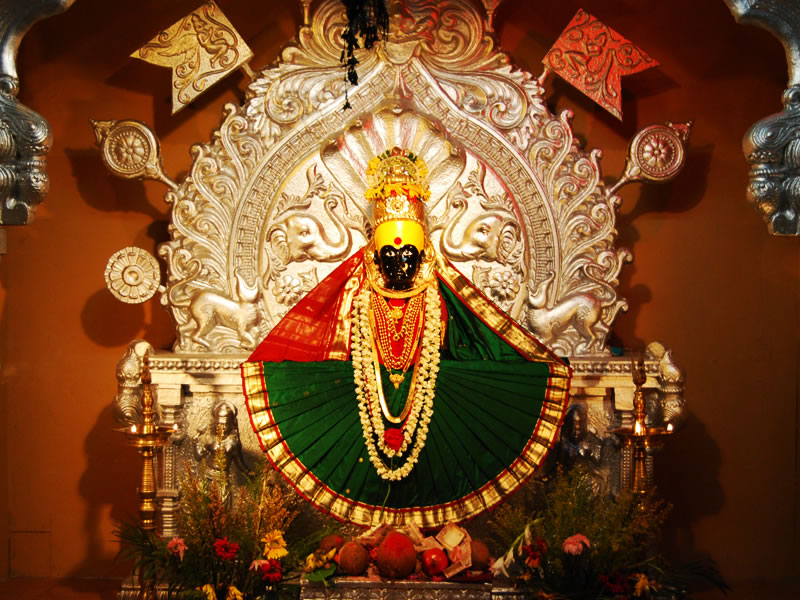 Mahalakshmi Temple (also known as Ambabai Mandir) is an important Hindu temple dedicated to Goddess Mahalakshmi and is worshipped by locals as Ambabai. The Shri Ambabai/Mahalaxmi Temple of Kolhapur in Maharashtra, India, is one of the three and half Shakti Peethas listed in various puranas of Hinduism.

The Shri Kolhapur Mahalakshmi Temple is located in the Kolhapur city of Maharashtra on the banks of the Panchganga River, about 156 miles south of Pune. The region of Karveer, the ancient name of Kolhapur is mentioned in the Puranas as Avimuktakshetra. It means that the region is eternally blessed by Lord Vishnu and Goddess Mahalakshmi who will reside here even during the Mahaprayakala or the Pralayam.

The significance of the Kolhapur Mahalakshmi Temple is that it is considered to be one of the sacred eighteen Maha Shakti Peethams. These Temples or the Peethams are mentioned and praised in the Ashta Dasa Peetha Stotram by Adi Shankaracharya.

It is believed that Lord Dattatreya comes and visits Goddess Mahalakshmi every noon to seek her blessings. It is a belief that the darshan of Sri Balaji at the Tirumala Devasthanam in Andhra Pradesh is incomplete without visiting Goddess Mahalakshmi at Kolhapur.

According to the written records, the history of the Kolhapur Mahalakshmi Temple dates back to the Chalukya period 550 AD to 660 AD. It is commonly agreed that the original Temple was built during this particular period by the Chalukyas as also evident from the distinctive architectural style. However, an earthquake in the 8th century destroyed most of the ancient structures. Some portions survived and can be seen to date.

The Kolhapur Mahalakshmi Temple was unknown to the world for a long time as it was covered by tall forests. Eventually, the Konkan King Karnadeo discovered the temple’s existence in 109 AD.

King Gandaraditya of the Shilahara dynasty (11th century) built the path on which the devotees circumambulate the main sanctum. He also built the two shrines dedicated to Goddess Mahakali and Maha Saraswati. It is believed that the Matulinga installed on the second level of the main sanctum was installed during the Yadava reign.

The Eastern entrance of the Kolhapur Mahalakshmi Temple Complex has an inscription dating back to the Maratha reign in the 18th century. It states that renovation work was carried out by the Dhabades and the Gaikwads who were ruling the area at that time.

In 1941, Shrimant Jahagirdar Babasaheb Ghatge installed the idols of the nine planets in the Navagraha Temple. The five domes or spires were constructed comparatively recently by Sri Shankaracharya of Sankeshwar in the 19th century. The Garud Mandap was built under Daji Pandit between 1838 – 1843. The Kurma Mandap and the Ganapati Chowk is believed to have been built by the Yadava dynasty.

The temple has four entrances but the main entrance called the Mahadwaar lies towards the West. It is believed that the Mahadwaar was built by Sri Adi Shankaracharya himself. The Sheshashahi Temple dedicated to Lord Vishnu, Navagraha Temple, Vithal Temple, and Rakhumai Temple are all present in the complex.  Towards the southern side, several shrines dedicated to Kalbhairav, Siddhivinayak, Radhakrishna, Annapurna, Indrasabha and Rameshwar are present.

Above the main sanctum, on the second level, a shrine dedicated to Lord Ganapathi is present. A Shiva Linga called the Matulinga can also be seen along with a stone Nandi.

A stone lion, the Vahana for the Goddess stands behind her. The crown of the Goddess contains the image of a Sheshnag, representing Lord Vishnu. A Shiva Linga is also carved on the crown but is not visible to the devotees as it lies buried under the Goddess’s ornaments.

Several guest houses are available for a stay near the Kolhapur Mahalakshmi Temple complex as well as in other parts of the city. The prices are reasonable. One can book rooms from a wide range of options. Most of the hotels provide decent and hygienic accommodation along with the restaurant facilities. Some of the popular hotels are the Padma Guest House near the temple, Hotel Jyotiba, Hotel Pearl and the Heritage resort.

Some festivals celebrated at the Kolhapur Mahalakshmi Temple are:

The daily schedule of the Kolhapur Mahalakshmi Temple is as below:

It is customary among Hindus to visit Tirumala Venkateswara Temple, Kolhapur Mahalakshmi Temple and Padmavathi Temple as a yatra (pilgrimage). It is believed that visiting these temples as a piligrimage helps achieve moksha (salvation).