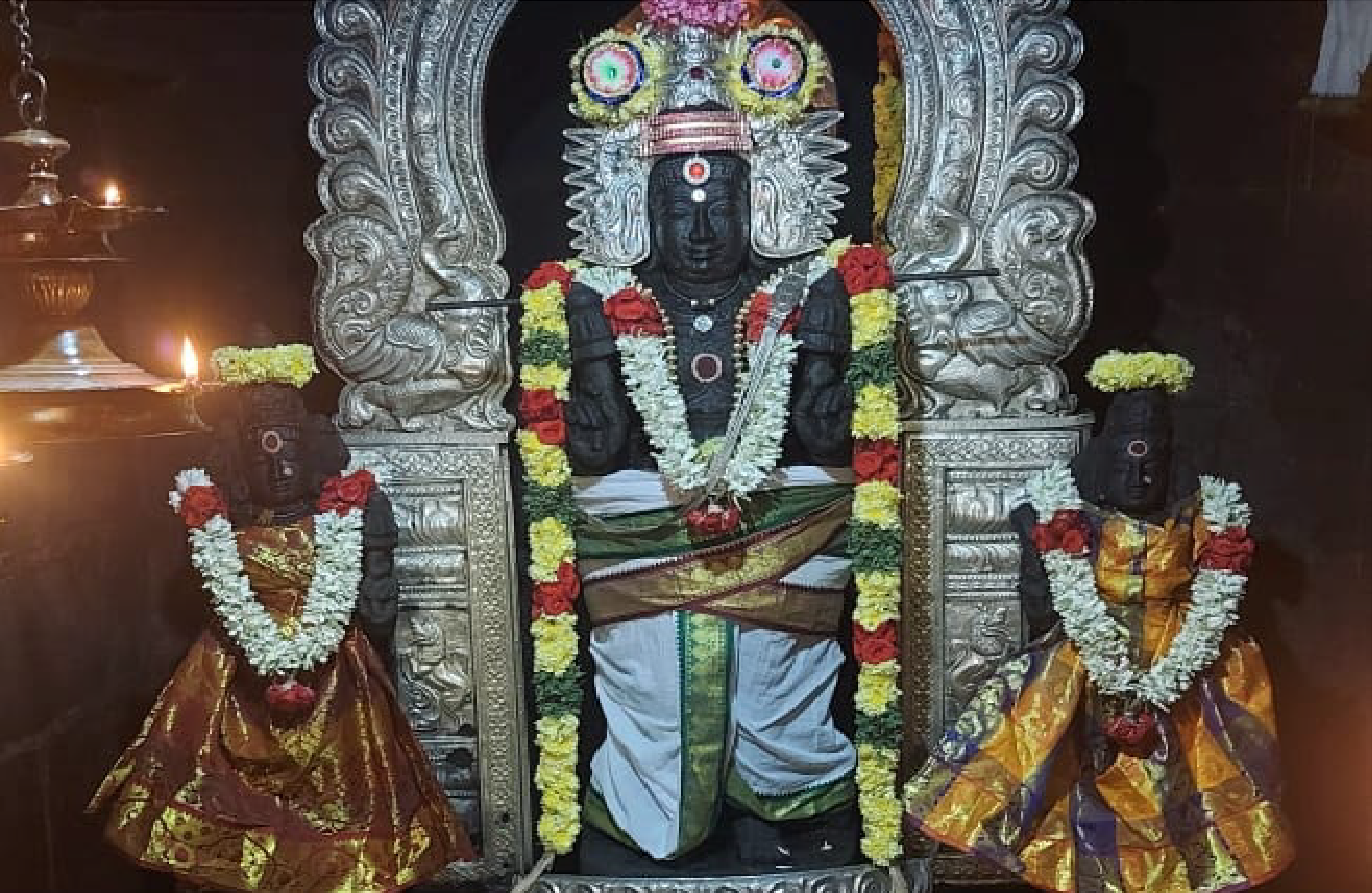 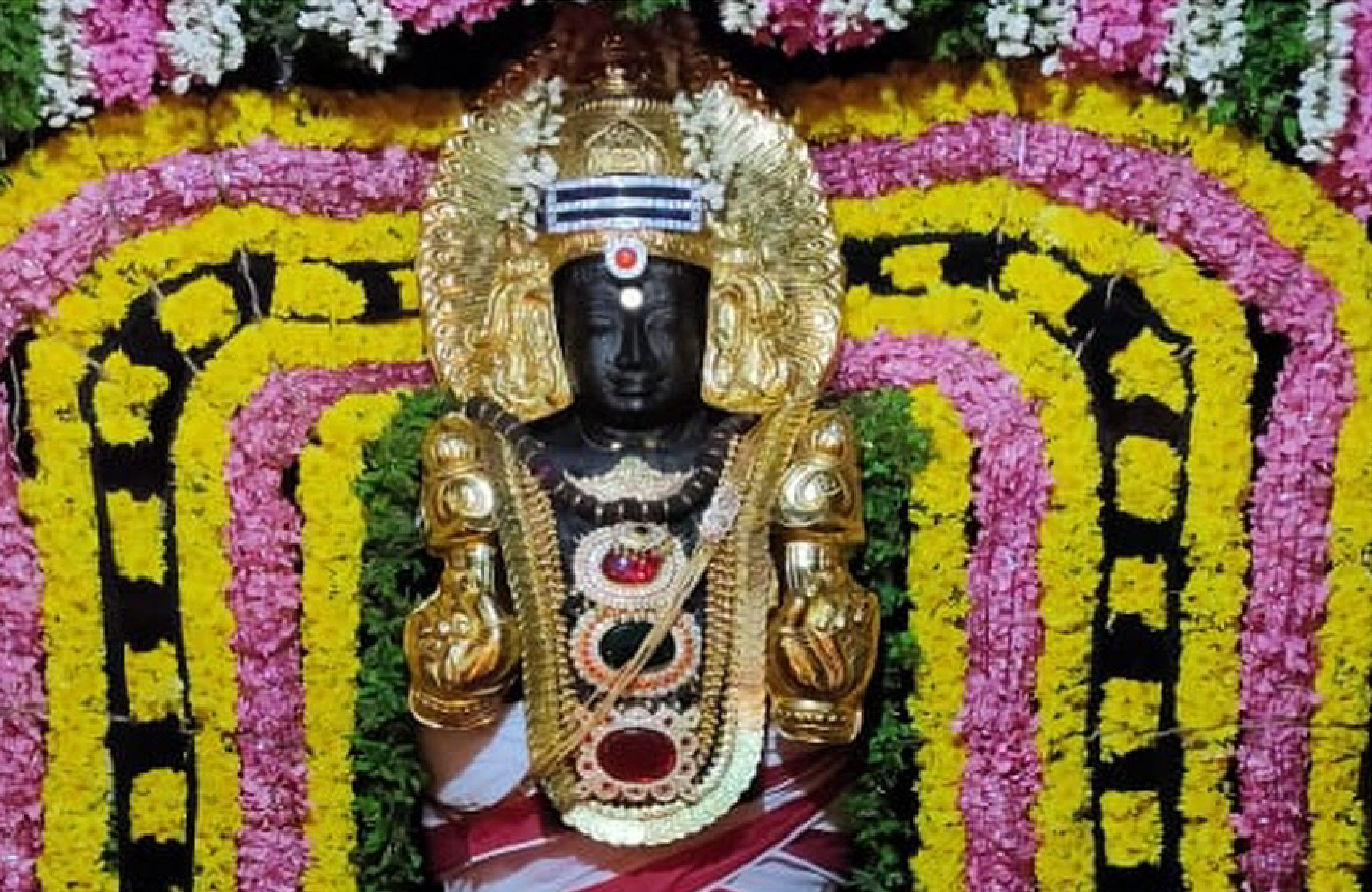 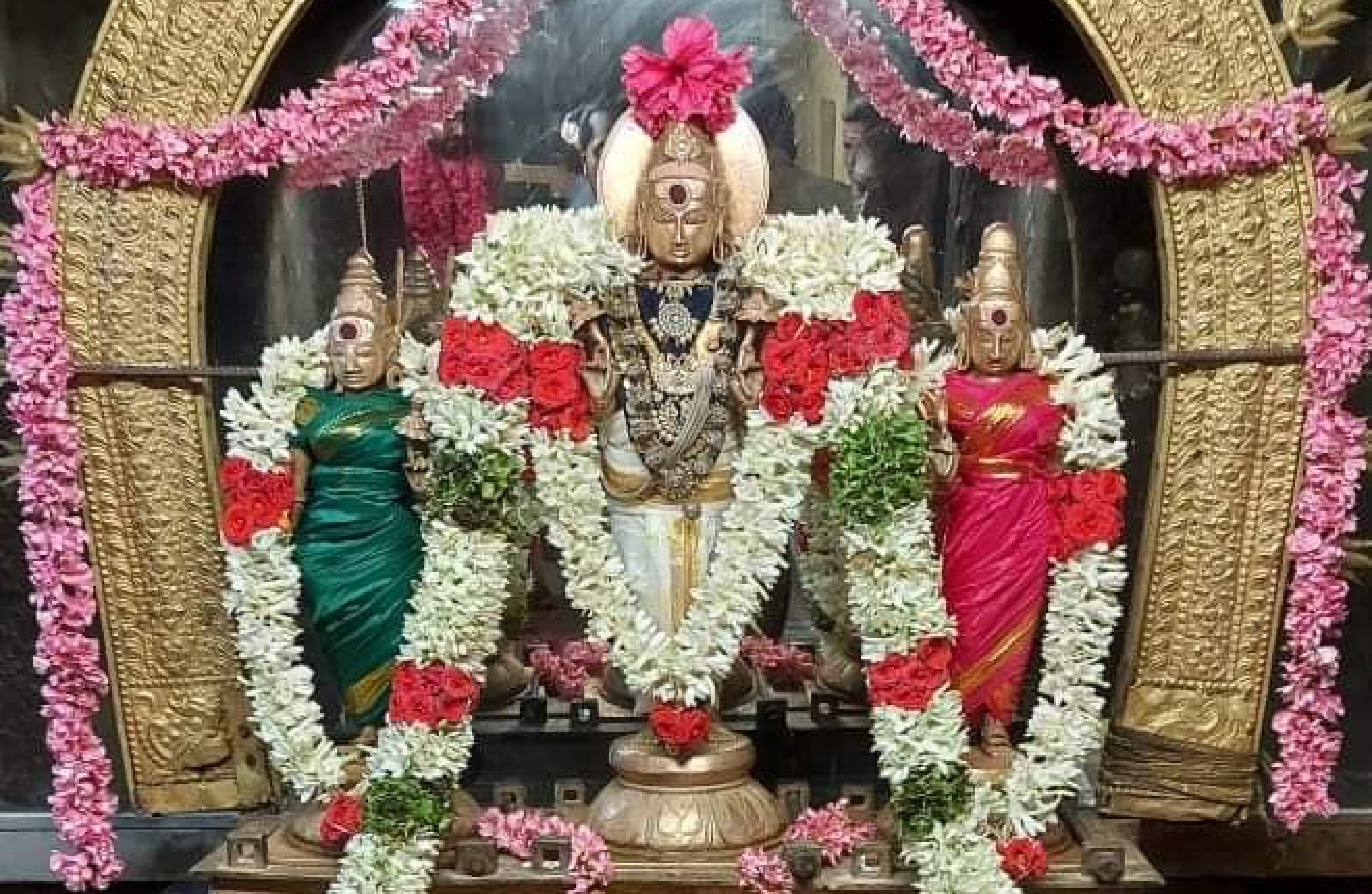 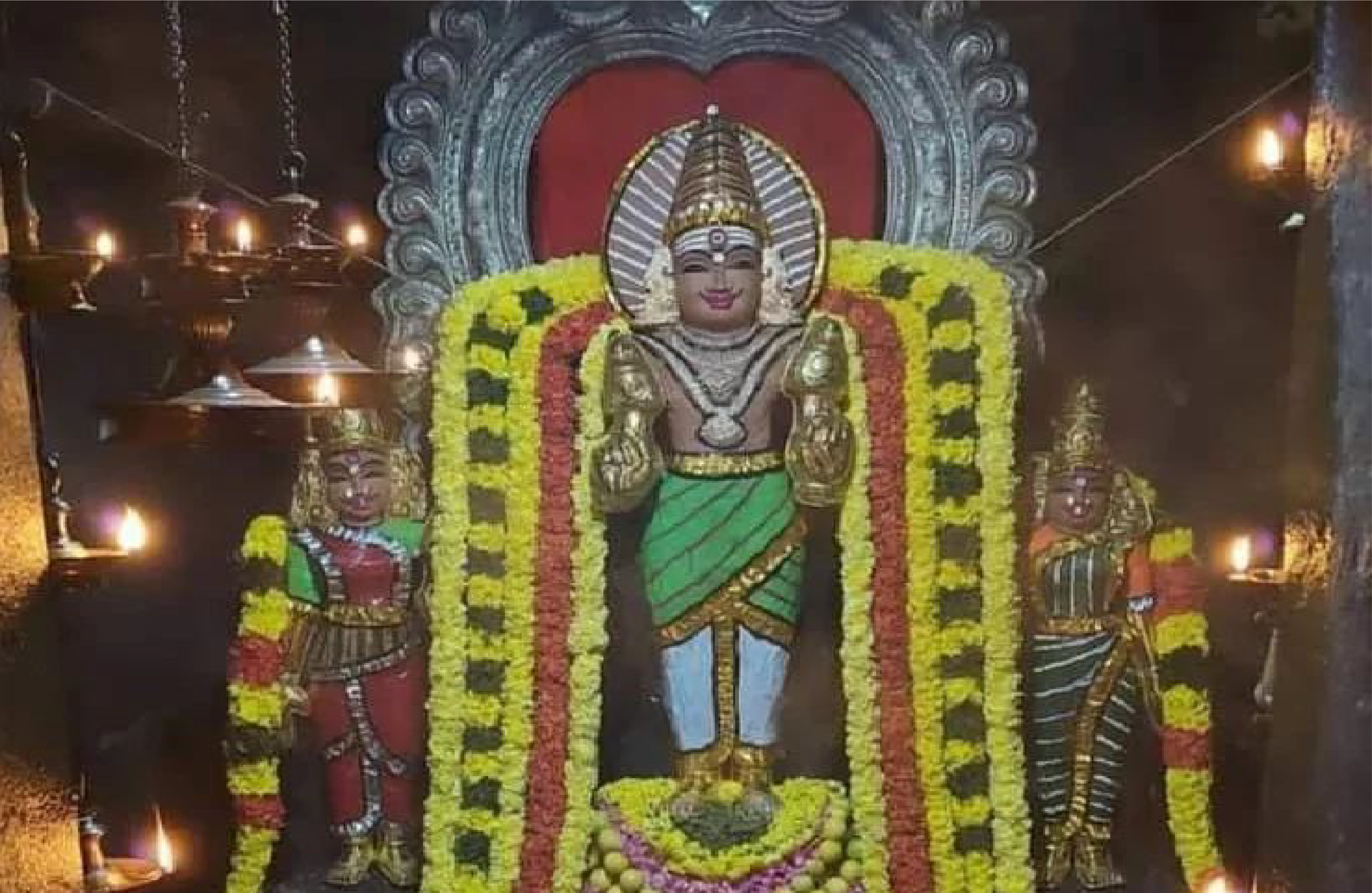 The Suryanar Kovil or the Suryanar Temple is one of the Navagraha temples dedicated to the Sun God, the first of Navagrahas. The main deities of the temple are Bhagawan Surya with his consorts Usha Devi and Pratyusha Devi. Located in a village called Suryanar kovil, this temple is one of the prominent temples in the South Indian state of Tamil Nadu.

The Suryanar Temple, Arulmigu Siva Suriya Peruman Temple Suriyanar Koil is a Surya Sthalam, one of the Navagraha sthalas. Dedicated to Bhagawan Surya, the temple has Suryanarayana as the presiding deity in a charioteer form, with a vinaanam representing the Sun’s chariot. The main shrine has Suryanarayan standing with Usha Devi on his left and Pratyusha Devi or Chaya Devi on his right. There are many other shrines dedicated to other eight planets or grahas. The temple also has shrines dedicated to Kasi Vishwanathar and Visalakshi in the sanctum. The shrines of all the other planetary deities face towards Suryanarayan. Sri Suryanarayana is found in a lying posture with his consorts Usha Devi and Chaya Devi, inside the sanctum sanctorum. One of the Moorthis of Bhagawan Suryanarayana shows him as a protector with hand in the refuge posture and the other hand resting on his thighs. The shrines of the remaining planetary deities face the Sanctum Sanctorum. This is the only temple from the Navagraha sthalas which is not devoted to Maha Shiva. All the other Navagraha temples have Shiva as their main deity. The temple is known to offer relief from Shani dosha and hence is a prominent religious monument of South India. Moreover, this is one of the only two temples dedicated to Bhagawan Surya, with Konark in North India being the other. This gives great significance to the temple.

Book a Pujan at Suryanar Kovil

Being one of the only two temples having Bhagawan Surya as the presiding deity, this temple holds great significance and importance in the Hindu religion. Moreover, this is the only Navagraha temple which has Bhagawan Surya as the main deity, unlike other Navagraha temples with Shiva as the presiding deity. It is one of the seven temples where the Saptha Vigraha Moorthis or the seven consorts of Shiva are located at cardinal points around the temple. Suryanat Kovil is a well-known and prominent Parihar sthalam, or a rectifying temple, where the baneful effects of Saturn or shani can be reduced, in order to bring improvement and growth in education, career and marriage. It is believed that the one who takes a dip in the surya pushkaini, the temple tank, for 12 Sundays, is relieved from all Navagraha doshas. Devotees also visit the temple for thulabaram, which involves offering wheat, jaggery and grains equal to one’s weight. It is also believed that worshiping in this temple, one can overcome putra dosham and kalathira dosham.

There are different queues that the devotees can select from for darshan.

Everyday there will be ritualistic pujas and sevas will be conducted at the temple.

There are Abhishekam performed on all the days with different timings. The Abhishekam Tickets Cost is Rs. 725 for two Persons. All these Pujas involve a sacred bath, decoration, offering of food and lightning of lamps.

The Suryanar Kovil temple is an ancient temple built during the 1100 AD, by king Kulothuna I of the Chola dynasty. It was then called Kulottungachola Marttandalaya. It is said that king Kulothuna had great affluence with Gahadwal dynasty, who worhsipped Bhagawan Surya. This temple was built as an influence of this acquaintance. The temple is mentioned in a song starting with the word ‘Suryamurthe’ in the songs of Muthuswami Dikshitar.

As per the Vishnu Purana, Brahma created Sun to banish the darkness of the universe. Bhagawan Surya married Usha Devi, also known as Sandhya, the daughter of Thuvasthu. After bearing three children, Usha was unable to bear the heat of Surya and decided to create her own shadow-image Pratyusha and leave her with Surya, while she retired into the forest to perform deep austerities. Unaware of the events, Surya mistakes Chaya as Sandhya and they give birth to three children Shani, Savarni manu and Tapti. Upon learning the truth, Surya finds Sandhya and requests her to return with him. Since then, Usha and Chaya are known as the two consorts of Surya. When the sun rises, it is called Usha Kalam and when the sun sets, it is called Saya kalam, depicting the two wives of Surya.

The temple was originally built in Dravidian style architecture during the reign of Cholas with later additions by the kings of Vijayanagara. The granite shrine that currently exists is said to have been built by king Srivijaya. The entrance tower of the rajagopuram is a 5-tiered gopuram that pierces the coumpound walls of the rectangular layout of the temple. The temple features a tower which is 15.5 meter in height and has 5 domes at the top. The first sight on entering the temple is that of a sacrificial platform called Bali Preetam and a mandap with an idol of a horse which is the vahana of Bhagawan Surya.  The central shrine of Bhagawan Surya is built on an elevated structure and houses the images of Surya with his consorts Usha and Chaya. Images of Viswanathar, VisalakshiNataraja, Sivakamini, Vinayagar and Murugan can be found in the hall that leads to the central shrine. There is an image of Guru, or Jupiter, one of the planetary deities on the axile in front of the central shrine. There are other separate shrines for all the other seven planetary deities. All these shrines are also built in a manner that the images face Bhagawan Surya in the Suryanar shrine.

Here’s how to reach Suryanar Kovil:

One can stay in one of the many hotels near the temple. Some options are

Temple Connect won’t recommend the above said hotels but given just for an information.

Vijaya Dashami – September – October – Celebration of victory of Bhagawan Rama over demon Ravana, and the victory of Goddess Durga over demon Mahashisura

Brahmotsavam festival – Month of Asweeja – Dhwajaroham or hoisting of flag.

Bhagawan Surya is known to give good health, success and prosperity. It is believed that those who are affected by ‘Graha Dosham’ of Bhagawan Sani (planet Saturn), can visit Suryanar Kovil to get relieved of their sufferings. People visit this temple on Sundays and do rituals by offering flowers and clothes to reduce the ill effects of unfavourable position of planets in their horoscope.

Suryanar Kovil is the only temple in Tamil Nadu which also has separate shrines for the other eight planetary deities.