5th temple to be visited in the Ashtavinayak circuit 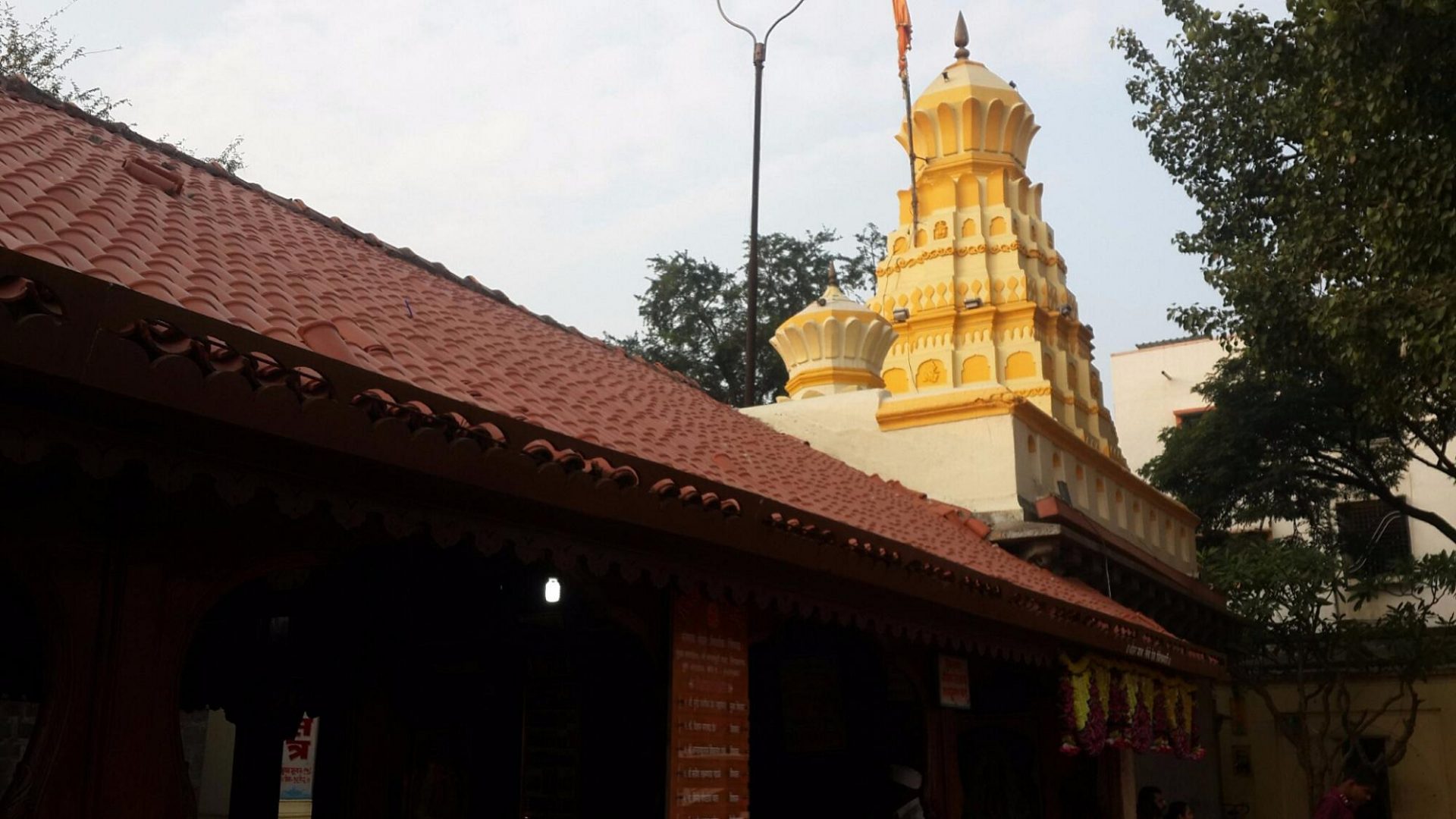 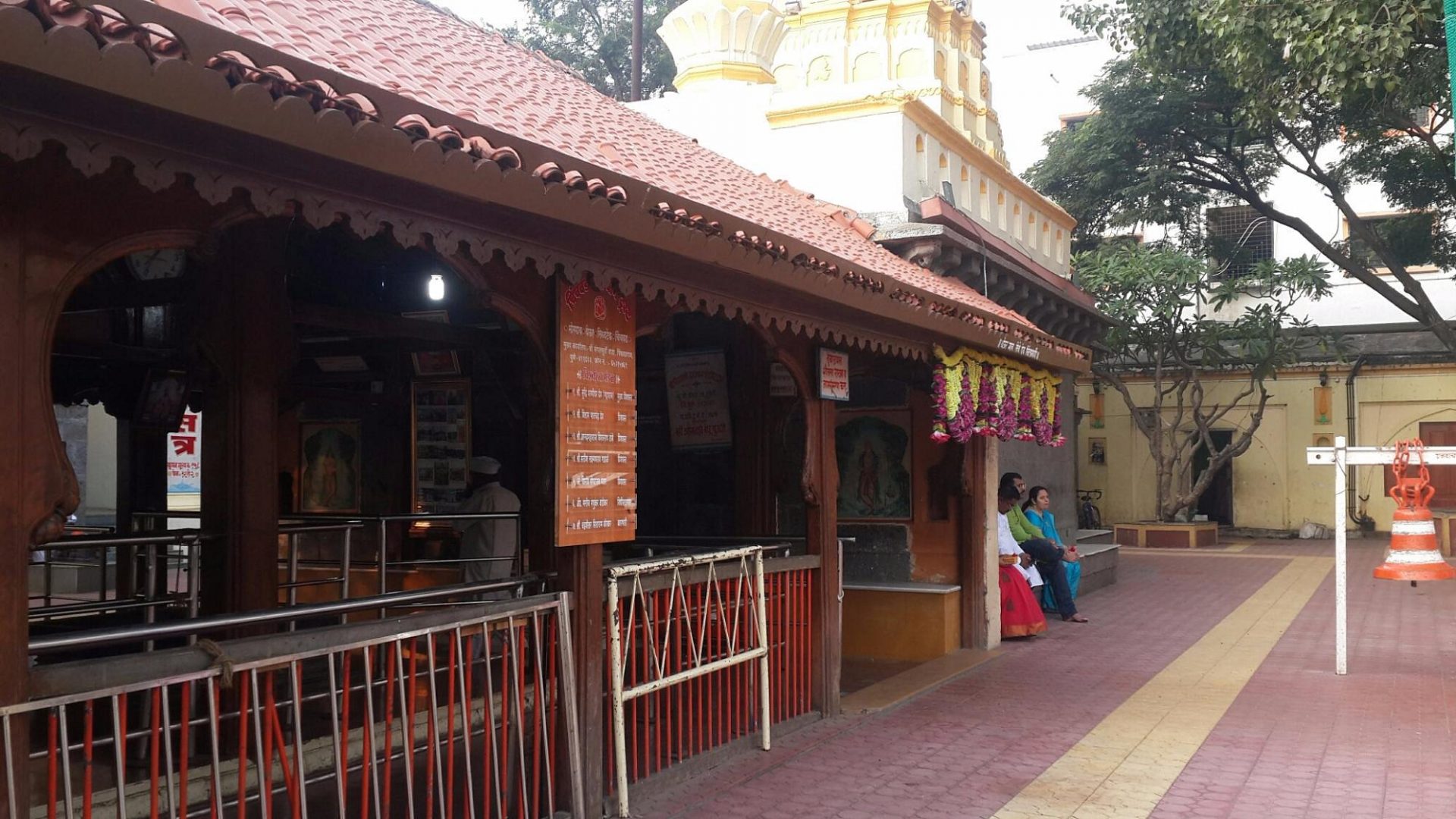 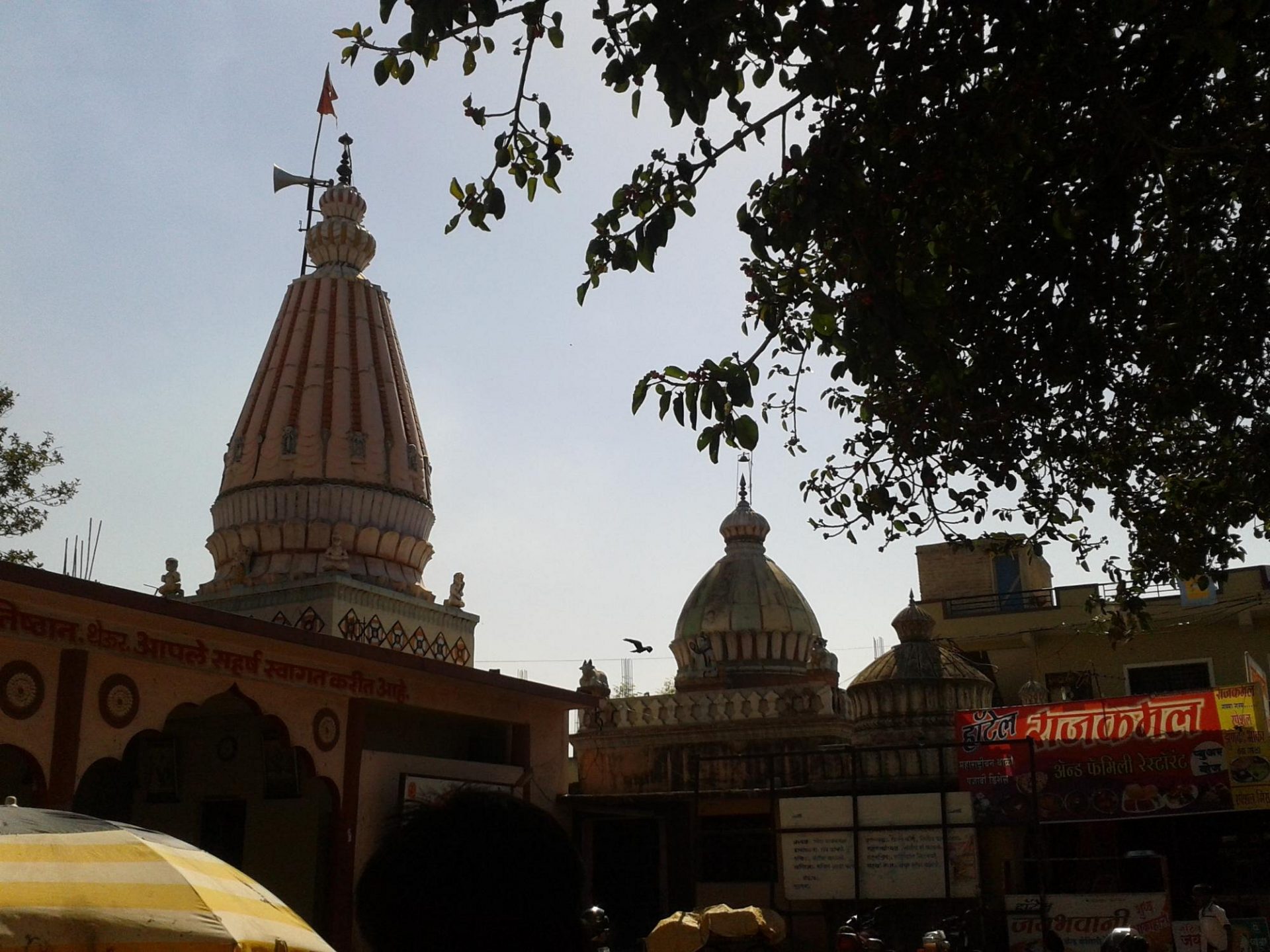 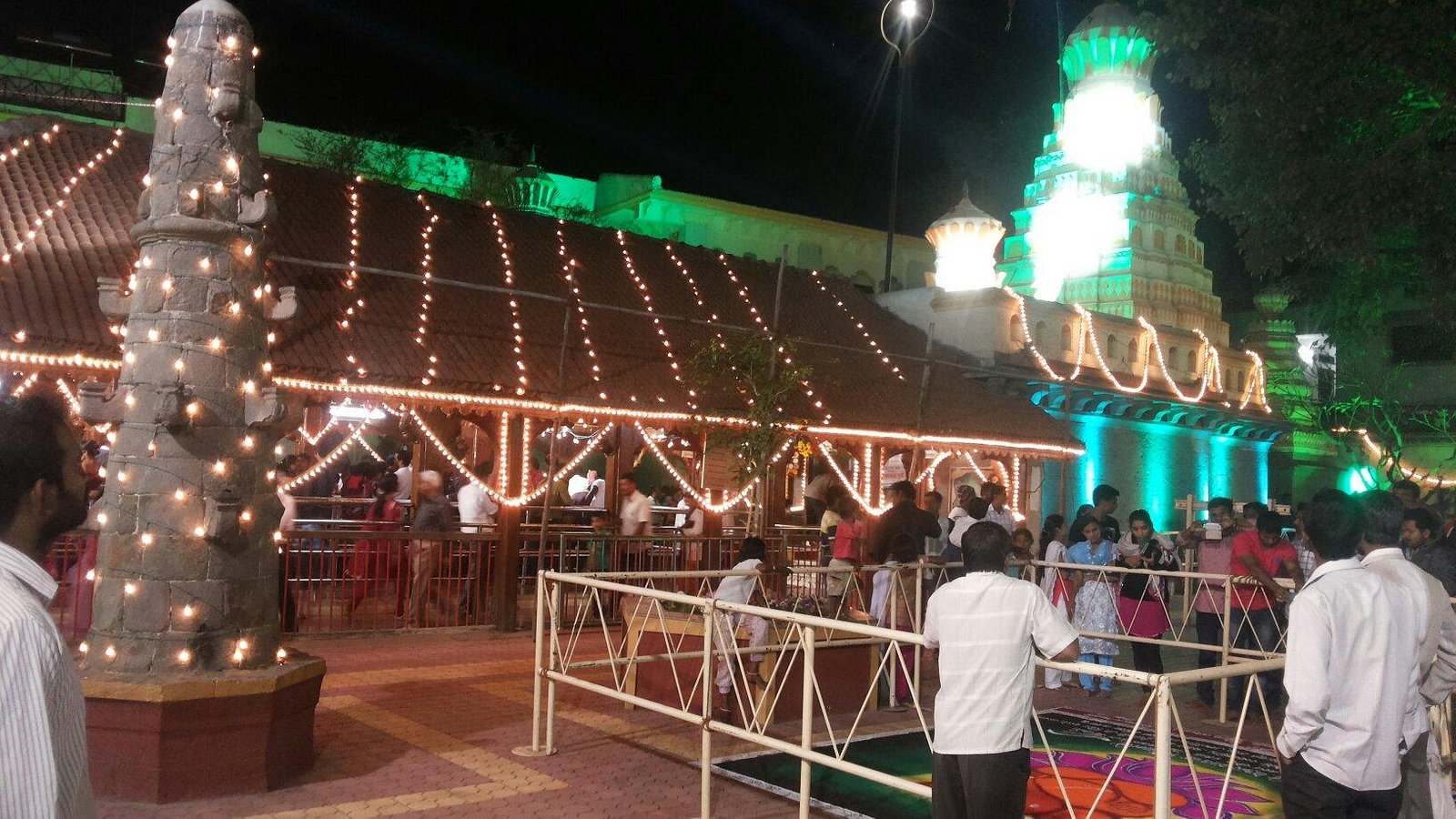 Chintamani Ganpati Temple is dedicated to Lord Ganesha and is one of the eight Ashtavinayak Temples in Maharashtra. The temple is in Theur in Haveli Taluka. Lord Ganesha is believed to have got back the precious Chintamani Jewel from the greedy Guna for sage Kapila at this spot.

Chintamani Ganpati Temple is dedicated to Lord Ganesha and is one of the eight Ashtavinayak Temples in Maharashtra. The temple is in Theur in Haveli Taluka. Lord Ganesha is believed to have got back the precious Chintamani Jewel from the greedy Guna for sage Kapila at this spot.

Chintamani Ashta Vinayak Temple is situated at Theur, 25 km south-east of Pune, in Haveli Taluka of Pune District. Theur (Theyoor) is situated at the confluence of the Mula-Mutha, and Bhima rivers. Theur was also known as Kadambanagar. The name Theur originates from the Sanskrit word Sthavar meaning stable.

When we have Chintamani Ganpati in our hearts, there is nothing to worry about.

The Mudgala Purana narrates: Gana or Guna or Ganasura was the son of king Abhijit and his wife Gunavati. A strong, but greedy and hot-headed warrior king, Gana pleases the god Shiva – Ganesha’s father with his worship. Shiva grants Gana the kingship of the three worlds – heaven, earth and underworld and decreed that Gana could not be killed by anything that possessed any of the three gunas. Once, Gana and his entire arrives at the hermitage of the sage Kapila, who owned the wish-granting jewel Chintamani. Kapila serves the prince and his army with delicious food created with the help of the jewel. The greedy prince desires to acquire the jewel, however the sage refuses. However, Gana seizes it from the sage. Kapila, a devotee of Ganesha, prays to Ganesha to retrieve the gem. Ganesha with his army appears in Gana’s dream; one of his soldiers cuts Gana’s head. Gana wakes up and marches towards Kapila’s hermitage with his army, intending to slay the sage. Abhijit tries to dissuade his son and advises him to return Chintamani to the sage, but in vain. Gana starts to destroy the hermitage. Ganesha’s shakti (“power”) – the goddess Siddhi appears and creates a thousand-armed warrior Laksha, who destroys Gana’s army while Ganesha himself beheads the arrogant prince. Ganesha returns the jewel to Kapila, however, the sage chooses to have his Lord instead of the jewel itself. So, Ganesha stays on in Theur with Kapila, taking the name of the jewel Chintamani.

According to another legend, the god Brahma meditated here and his restless mind became sthavar due to Ganesha’s blessings. Since Ganesha got rid of Brahma’s Chintas (“worries”), he became known as Chintamani.

According to another tale, the god-king Indra worshipped Ganesha here under the Kadamba tree to get rid of the sage Gautama’s curse. The place was thus known as Kadamaba-Nagar, the town of Kadamba trees. 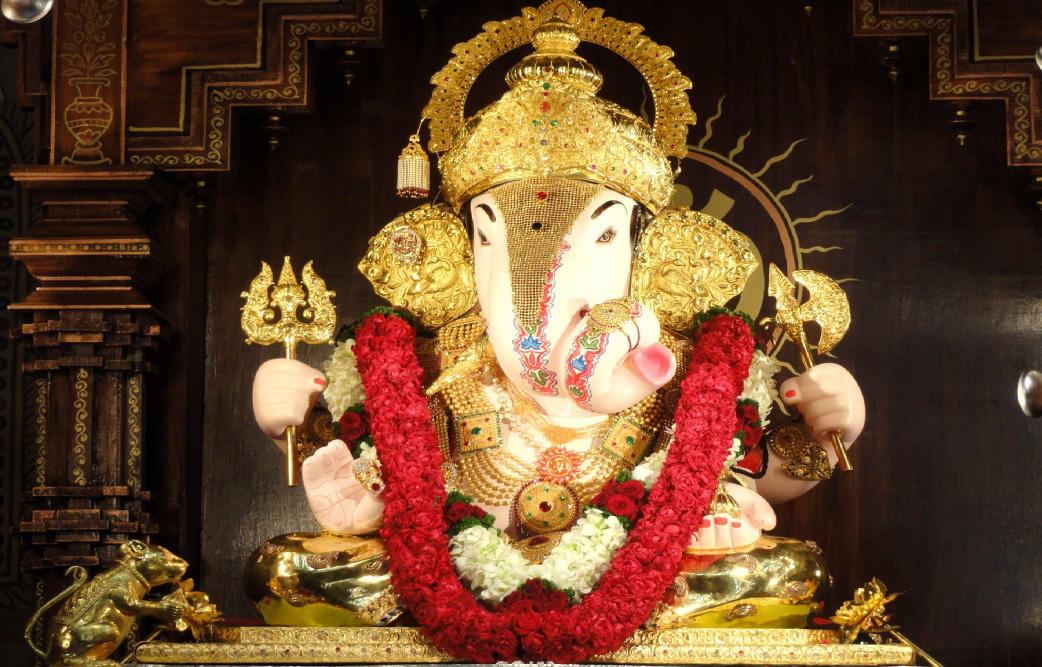 History of the Chintamani Ganapati is that there is no record of the person who built it. However, devotees believe that it exists since ancient times. Also, Chintamani Ganpati is related to the Saint Morya Gosavi, a staunch devotee of Lord Ganesh. Moreover, his descendants constructed the main temple structure.

Following a hundred years, Madhavrao Peshwa raised the Sabhamandap of the temple. A couple of years prior to the Shikhar (peak), of the temple was blessed in gold. As Peshwas visited these spot frequently, the two 5 metal bell purchased from Europe was one kept in Mahad and another one was kept here.

After the passing of Madhav Rao Peshwa, his wife performed Sati, the beautiful garden in the temple was made in her memory.

The temple was build in around 18th Century CE during the Peshwa rule and has vivid architectural style.

It is portrayed as one of the largest and increasingly acclaimed of the Ashtavinayak temples. The temple’s entryway situated toward the North is moderately smaller. The central icon of Chintamani Ganpati faces East. The temple has a wooden Sabha-mandapa which was built by Madhavrao. The lobby of the temple additionally has a black stone drinking fountain in it.

There are a number of smaller hallowed shrines in the temple complex. Behind the temple is the Peshwa Wada also known as the Peshwa Palace. Once it was the living arrangement of Madhavrao. Today the everyday activities of the temple are conveyed from this spot.

By road: Theur is nearly 25 km from Pune. Several state-run buses operate from Pune and Mumbai to Theur. In the event you are self-driving you can take Mumbai to Khandala road course. After crossing the Bhor Ghat, the town of Theur can be seen which is situated in Haveli Taluka, Pune District.

By rail: The nearest railway station to Theur is in Pune. The Pune station connects to major Indian cities. Pune Junction railroad station associates the city with all the prime Maharashtra cities. There are a few mail/express trains and superfast trains connecting the city from south, north, and west.

By air: The nearest airport is at Pune, which connects to all major Indian cities. Lohegaon Airport or Pune Airport is a universal air terminal, found 15 km far from Pune downtown area. Regular flights from Bangalore, Jaipur, Delhi, Goa, Mumbai, Hyderabad, Chennai, and Nagpur lands in the airport. Theur is 22 km from Pune Airport.

There are not many places to stay for accommodation at Theur. Therefore, pilgrims usually consider staying at Pune which is just 25 km from the Temple.

The word Theur comes from Tharb which means restless. It is believed that the restless mind of Lord Brahma came to peace at this place. This is the site of the Chintamani form of Ganesh who is believed to fulfill all the desires of his devotees. Shri Chintamani was also the family deity of Peshwa Madhavrao, the last of the great Maratha Peshwas, who died in Theur. Theur is rederred to as Kadamb Nagar. Temple is also referred to as Sthavara kshetra.

This is one of the Ashta Vinayak temples. It is surrounded by a huge compound wall. Upon entering inside, you find yourself in a spacious area with a small mandir. One can have a good Darshan of the presiding deity. There are few trees in the temple complex too. Overall, a nice temple to visit over a weekend.