Sukran - one among the navagrahas to be worshiped here 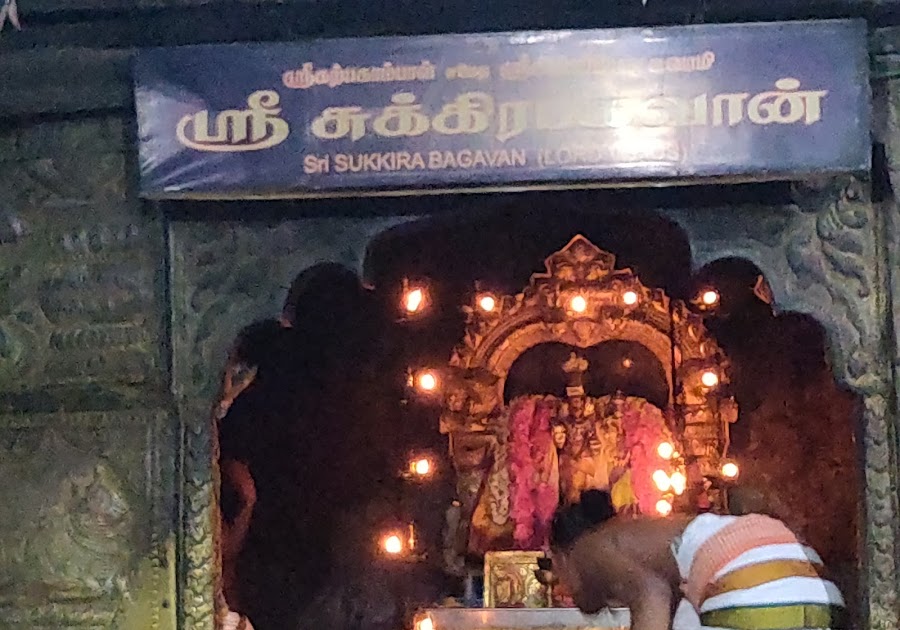 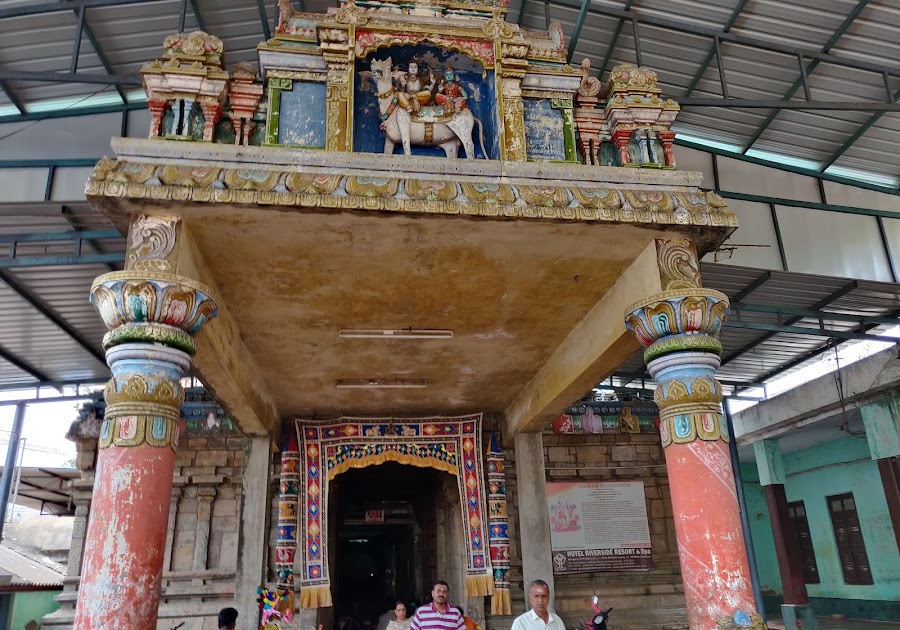 Agneeswarar temple is one of the ancient Hindu Navagraha temples. The chief deity of the temple is Lord Sukra (Venus). It is dedicated to Lord Shiva who is worshipped as Agneeswarar and his consort Parvati as Karpagambigai Amman. It is believed that Sukra resides within the stomach of the moorthi of Lord shiva.

The Agneeswarar temple, also known as Sukran Navagraha Sthalam, has the presiding deity as Sukra (Venus). However, the main moorthi in the temple is that of Lord Shiva in the form of Agneeswarar. This is one of the Paadal Petra Sthalam and the glory of this temple is well explained by the Tamil saint poet Nayanars.

Sukra is believed to be within the stomach of Lord Shiva. Having Sukra residing within his stomach, Lord Shiva is here worshiped as Sukra hence there is no separate shrine for Sukra. The Lord is represented as a Lingam, an illimitable nature of Lord Shiva. He is called Agneeswarar, the fire of God.

Deities of Karpaga Vinayakar, Natarajar, Dakshinamoorthy and Pullunda Nandhi are also worshipped here. There are more shrines of Kalikamar and Manakanjarar in the temple.The sculptures of Lord Natarajar and Shivakami in the Nataraja sabha of the temple are called Mukti Mandapam. His tandav here is specially named Mukti Tandava.

There are four more Mandapams in the temple which are celebration mandapam, decorative mandapam, vahana mandapam and a 16 ft mandapam with three praharams. The Agneeswarar temple is known by other names such as Agnisthalam, Brahmmapuri and Palaasavanam.

The temple is located banks of Cauvery in a village Kanjanur which is 18 km from Kumbakonam. The village is on the Kumbakonam-Aduthurai road around 57 km from Tanjavur district in the South Indian state, Tamil Nadu.

Sukran is believed to be located within the stomach of the murti of Shiva.

Book a Pujan at Agneeswarar Temple

This is a temple where Shiva is worshiped as one of the planetary deities, Sukra, giving it a unique religious significance. The special Mukti Tandava performed in the Natrajar Sabha also gives this temple a special religious importance.

By offering prayers and pujas like the Kalathira dosha Pariharam dedicated to Sukra, one can see great benefits in life, wealth and health. This temple is specially known to give relief from any kind of eye disorders. Friday is considered as the most auspicious day to please Lord Sukra.

There are six puja riturals performed in a day.

Lord Sukra is worshipped with diamond, white cloth, white lotus, mochai powder and athi. This is known to ward of any planetary ill effects.

Kalathira dosha pariharam is one of the special pujas performed for Lord Sukra. 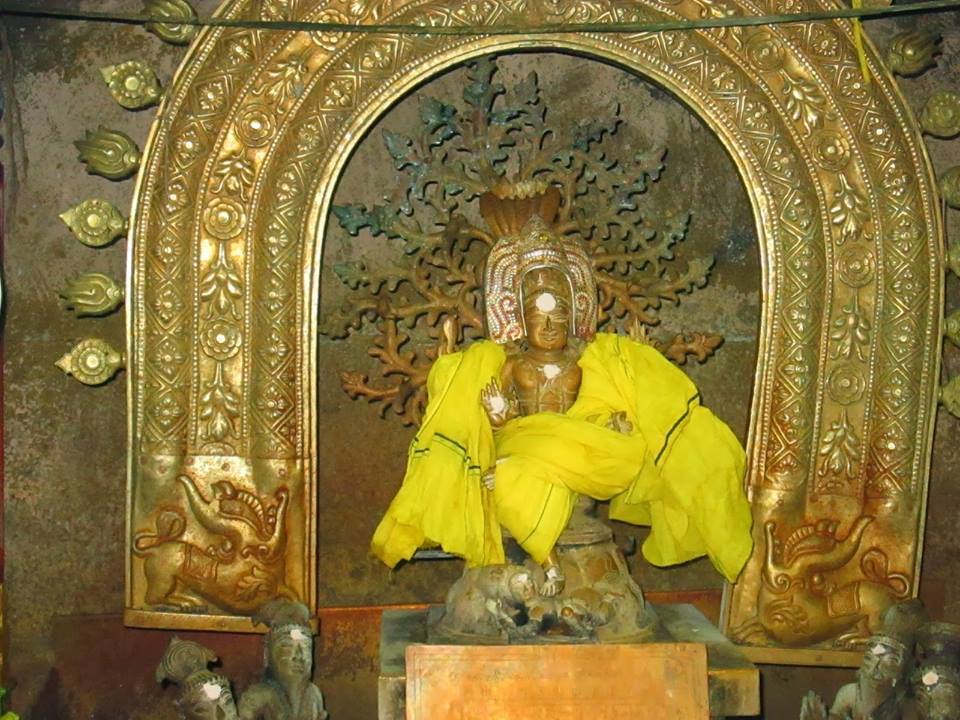 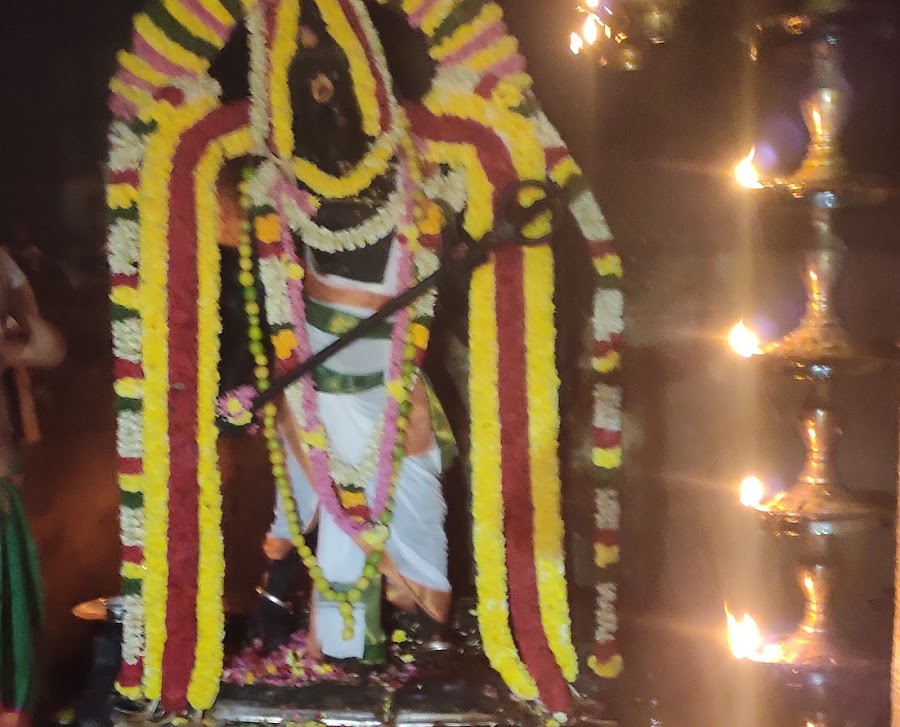 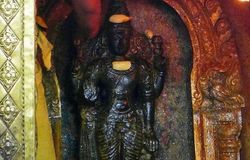 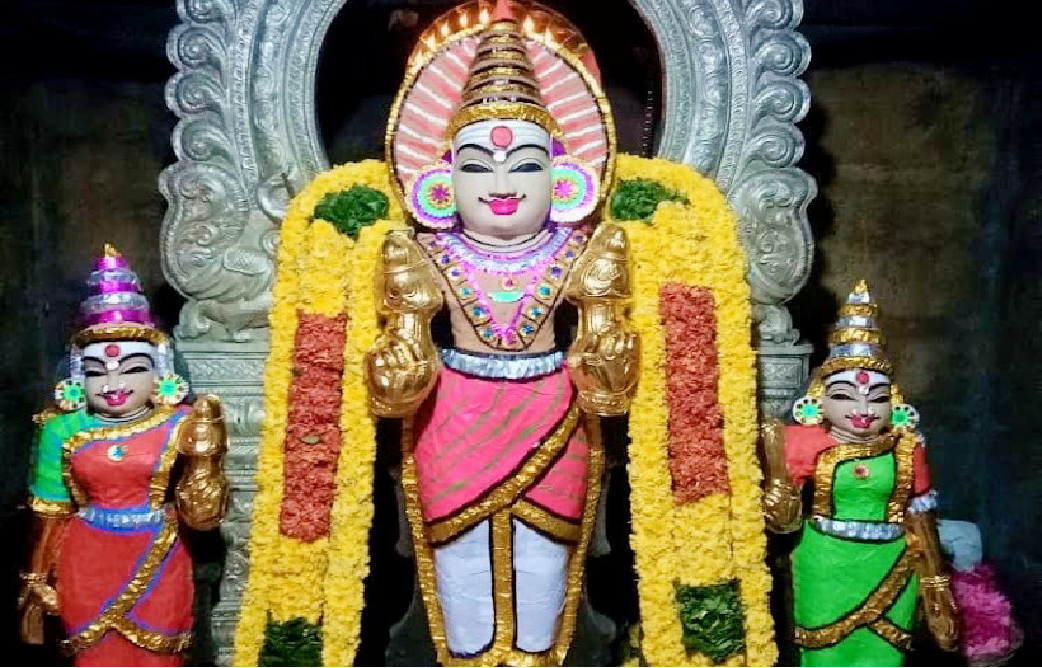 This temple was built by the Chola’s and was renovated by the kings of Vijaynagara empire.  Father of Vyasadeva and the author of Vishnu Puranam Parasara Muni was blessed by Lord Shiva with the vision of the cosmic dance Mukti Tandavam (The Nataraja sabha mentioned as Mukti Mandapam and Shiv Tandavam). One of the interesting aspect of this temple is the oil that is poured during the abishekam is completely absorbed by the deity. There is no separate place of Lord Sukra as Lord Shiva is incarnated himself as Sukra (Venus).

It is believed that Lord Brahma was blessed to have a vision of the marriage of Shiva and Parvati in this temple.

The temple has a 5 tier Rajagopuram and 2 Prakarams around it, there are inscriptions from the Chola’s and Vijaynagara empire. The stone image related to Haradatta Sivacharyar of Vaishnava origins, Natarajar and Sivakami are seen here. The temple of Agneeswarar and Goddess Karpangambigai faces east and has five mandapams, the Mukti Tandava, Celebration, Decorative, Vahana and a 16 ft mandapam with three praharam.

By Rail: Kumbakonam station at– 18 km

By Road: Frequent bus service are available from Kumbakonam bus terminal it is at 17 km

There are many other hotels around the temple for stay.

Navaratri is celebrated for nine days

After Guru, Sukra is known to be the most beneficial planet and if the placement of Sukra is perfect in any horoscope, the person enjoys better life and wealth. If it is unfavourable, devotees can offer prayers, white lotus, white cloth and light lamp to remove hurdles in life.

It is said to bring blessings from ancestors, removes ill effects of karma, brings knowledge and harmony and removes doshas related to marriage and children. With so many blessings to be received from this temple, it becomes a must visit for one and all.